Mobile World Live NEW BLOG: Five years is a lifetime in the mobile tech space. In 2009 – the year Mobile World Live launched – our news coverage was dominated by headlines such as ‘Symbian to maintain OS dominance’, ‘Clearwire, Sprint complete WiMAX merger’ and ‘Nortel confirms CEO exit as losses widen’.Back then Facebook only had around 50 million monthly active mobile users (compared to more than 1 billion today), while future WhatsApp founder Jan Koum was quietly working on a solution to his frustration of missing calls at a gym that banned the use of mobile phones.Mobile World Live has undergone its own fair share of changes since 2009 too (although we’re still some way short of Facebook’s traffic levels or WhatApp’s valuation). 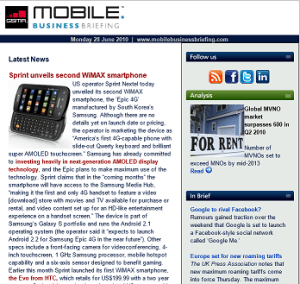 From the early days of touting Mobile World Live as an ‘online community’ that required registration and passwords (with the benefit of hindsight that approach wasn’t the easiest way to foster growth), as well as a collection of disparate services (who remembers Mobile Business Briefing, pictured left?), Mobile World Live now publishes a flagship daily newsletter sent globally to more than 80,000 execs, as well as weekly publications focused on the mobile apps, devices and money sectors. Plus it has launched regional news services for the Arabic, Chinese, French, Japanese, Korean and Spanish markets. And it broadcasts live TV services, as well as streamed video content from the industry’s biggest events, featuring the industry’s biggest names.

We want to keep expanding coverage, particularly on a regional basis. To this end Mobile World Live is excited to announce the appointment of Joseph Waring as Editor of our new Asian news service. Based in Hong Kong, Joseph brings a wealth of experience and credibility to the position, having been group editor of Telecom Asia for more than ten years.In the next few weeks we will officially launch our new Asian service, including a weekly newsletter providing exclusive content on the world’s biggest and most diverse mobile region. Joseph is the perfect recruit for this role, and we’re delighted to welcome him on board.As Mobile World Live evolves it is essential the service publishes the type of content our readers demand. That’s why we’ve recently opened a Mobile World Live Reader Survey, designed to help drive the future direction of the product. Please share your thoughts on how you’d like to see Mobile World Live develop; in return your details will be entered into a draw to win an iPad Air. The survey only takes a few minutes to complete and the team is grateful for your feedback.Thanks for helping make the past five years such a successful period for Mobile World Live. Here’s to many more headlines over the next five, including some major Asian scoops…The Mobile World Live team Previous ArticleNew Sprint CEO hints at job cuts – reportNext ArticleIndian operators face revenue threat in 2015 auction Justin Springham HomeBlog 5 years of news reporting… and a news announcement of our own Author Justin manages the editorial content for the Mobile World Live portal and award-winning Mobile World Live TV service. In the last few years Justin has launched and grown a portfolio of premier media products, which include the Mobile World Congress… Read more Tags AddThis Sharing ButtonsShare to LinkedInLinkedInLinkedInShare to TwitterTwitterTwitterShare to FacebookFacebookFacebookShare to MoreAddThisMore 12 AUG 2014